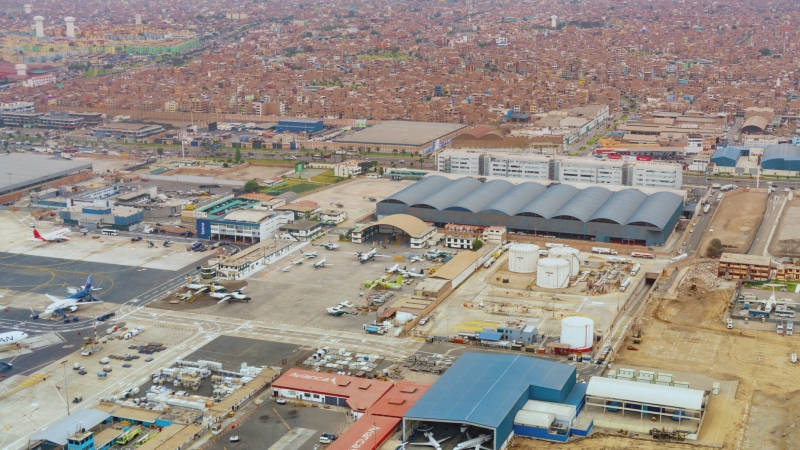 At a $1.5 billion USD overall investment, the expansion is not only one of Peru's biggest infrastructure projects to date, but it will likely make a significant contribution to Peru’s growing tourism industry. Peru is one of the main hubs for that part of the world, so it’s where the vast majority of people fly when they’re heading to the western part of South America. About 20 million travelers pass through Lima’s airport each year. By the time the expansion is complete in 2024, that figure is estimated to rise to 35 million travelers.

“Normally when people think of airports expanding they think of runways and this project will include that as well as a new control tower, but it will also include shopping malls, hotels, event spaces, and even warehouses. It’s like building an entire city,” said Armando Sanchez of Lima Airport Partners.

The overall size of the effort makes it a megaproject, but in Peru, most megaprojects are mining related endeavors, so Lima Airport Partners knew it wanted to bring in seasoned experts to help them ensure the highest degree of excellence.

“Airports are unique,” said Sanchez. “They’re different from energy companies in that the people who manage them don’t build major infrastructure all the time, so we knew we wanted to work with experts who were deeply well versed with capital projects. We needed people who could help us assess and design all the digital systems and processes that would allow us to manage the expansion at a true best practices level.”

One of the first orders of business for Lima Airport Partners was to set up the digital systems that the various teams would be using to manage every aspect of the project. The team had already chosen Unifier as its core tool. Eight other software platforms were selected to handle various project related tasks from scheduling to document management.

“Our program director was clear from the beginning that this wasn’t going to be a typical local program,” Sanchez added. “Because of the size of the investment, we looked for the best in everything. We wanted to create a truly world-class approach to building at this scale.”

An initial collaboration with a Latin American company showed the Lima team leaders that they needed to work with a group that had a deeper level of Unifier experience. At that point, they found Enstoa. The Enstoa collaboration began as a four-week project. Then, Lima Airport Partners extended the relationship and for the last year, Enstoa has been collaborating with the airport’s capital projects team to create advanced project controls and scheduling capabilities.

“Enstoa is working closely with us not only to integrate Unifier and P6 with all our other systems, but it’s also helping us integrate all the information in dashboards so we can get really high-level real-time visibility into project costs and how things are tracking to timelines and budget,” explained Sanchez.

“The Lima Airport Partners team seemed to appreciate the way we sat down with them and went through the process step by step,” said Enstoa Director of Technical Development Glen Bugden. “It revealed the true complexity of what they’re doing and how important well-designed processes were going to be to the overall success of the project.”

Finding a provider that could effectively administer the tool was another important factor for Lima Airport Partners. Around the world, most airport personnel are not allowed to reconfigure governance-related processes in an airport’s digital systems without permission, so having an experienced partner that could facilitate this part of the process was a major plus.

“Enstoa is great,” Sanchez added. “Many people from Enstoa have come to Lima for the implementation and integration efforts and they’ve all been really senior consultants, which is exactly what we needed.”

Ground was officially broken on the construction portion of the airport expansion project in late March and is slated for completion in 2024. In addition to Enstoa, Lima Airport Partners is working with Italian constructor Salini Impregilo along with Spanish firm FCC and American multinational AECOM.

To learn more about our experience in systems integration and reporting, get in touch.